The Traditional Use of White Sage 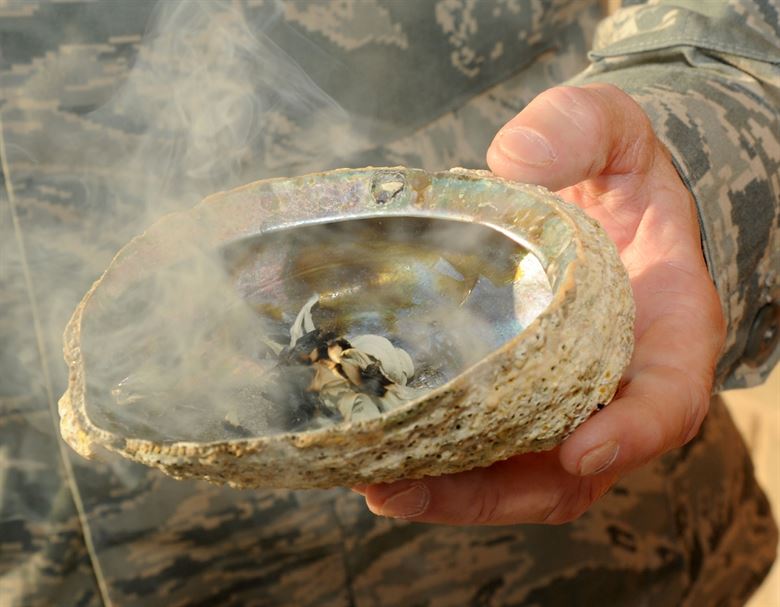 White sage (an indigenous plant to the Americas) has become a popular energy clearing plant for many people as of late. If you have never heard of sage, it is an herbaceous plant that is used in many spiritual rituals. Most of the time, it is dried and burned. Its smoke is fragrant and has been ceremonially used by indigenous stewards of this land to heal energetic blockages and set good intentions. Additionally, studies performed in 2006 by scientists from India, and published by PubMed have found that burning sage for one hour can remove up to 94% of bacteria found in the air.

Why You Should Consider Alternatives

As a Yoeme/Pascua Yaqui woman, and someone who has both studied and taught Native American history, I understand why it is important to share alternatives to white mountain sage with people so that we can all contribute less to practices that negatively impact First Nations communities and make space for California Natives to preserve their ancestral medicines.

Sage has become so popular in recent years that First Nations people have requested that non-indigenous people stop overharvesting white sage so that the plant does not disappear. Another issue raised by First Nations Peoples is that of profiting off of this medicine, which is traditionally gifted to those in need as a sacred medicine, and picked in an intentional and traditional way. Harvesting is traditionally and historically carried out through respectful ceremony, and includes the care for the plant as it grows from seed to plant. One should never take more than is needed, thanks and offerings should always be given to the plant/relative, and sharing the medicine is done in a good way, never for profit.

So, what are alternatives to burning white mountain sage? Luckily, there are several.

Lavender is one that can be dried and burned, and helps to bring in tranquillity, psychic protection, happiness, and has been known to increase clairvoyance. It is native to the Mediterranean. As an aside, René-Maurice Gattefossé, a French chemist and scholar, discovered the medicinal benefits of lavender essential oil in 1910. During a chemistry experiment in his laboratory, an explosion occurred and covered him in gangrenous sores. Gattefosseé rinsed himself with lavender essence to ease the pain and found that it stopped the gasification of the tissue, and healing began the next day.
Like sage, Mugwort can be burned to clear negative energy or any energy that is blocking higher vibrations. It has also been known to stimulate lucid dreaming and is burned at bedtime for this purpose. Mugwort is native to Europe and Eastern Asia.
Juniper, which is native to Europe and Southwest Asia, can also be burned for ritual purification and it has an energizing fragrance that aids mind and body when one is feeling tired.
Finally, Rosemary, native to the Mediterranean, can be used to cleanse the home and your personal energy. Rosemary was first used by the Egyptians in burial ceremonies and was later considered sacred by both Greeks and Romans. In Europe, Rosemary was often worn to commemorate the dead.

These are just a few alternatives to burning white mountain sage. If you are sensitive to smoke, there are smokeless alternatives to sage that can be used in the home as well. Crystals, salt, and cinnamon brooms may be helpful for those who seek to clear energy in the home that is stale or heavy.

Clear quartz crystals are excellent for infusing spaces and individuals with positive energy. Placing clear quartz crystal points in the corners of your space will both clear out any lingering negative energy and protect that space as long as they remain there.
Salt is the smallest crystal in the world and absorbs excess energy, while salt baths and salt circles around the home set intentions for purification and protection.
Cinnamon brooms are used for protection and can be created by tying together pine needles, covering the needles in an adhesive such as glue, and covering the tiny broom in ground cinnamon and cinnamon essential oil. Use the broom to sweep unneeded energy from your home and enjoy the scent!

Find Harmony with the Earth

Being able to cleanse a space of negative energy is extremely important, notably now, when the world is facing a great deal of stress and fear during the Coronavirus Pandemic. However, it’s important to work in harmony with the earth at all times, especially when trying to remove negativity from your space. By using some of these white sage alternatives, you can bring a positive balance into your life while also respecting First Nations’ traditions and the needs of this beautiful planet that we all call home.

You have a life purpose. Wondering what you’re meant to do? You won’t know until you get a life path reading with one of our talented life path psychics. A life path psychic can help you find what you love so you can love what you do.

About California Psychics
California Psychics is the most trusted source of psychic readings. We have delivered over 6 million discreet and confidential psychic readings by phone since 1995. More than a prediction, we are your guide for life’s journey. Serenity, happiness, and success are just a phone call away. With over 400 psychics online to choose from, you’re sure to find the best psychics for you. Call one of our trusted and accurate psychics today! Confidential and secure, real psychics, accurate predictions, 100% guaranteed.