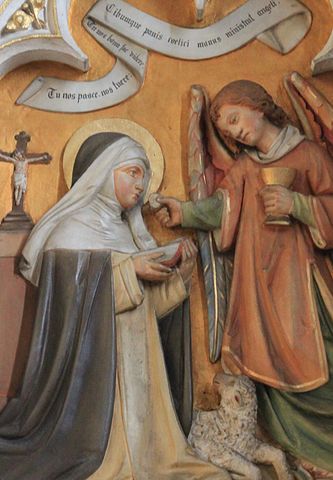 When only a small child in Montepulciano in Tuscany, Agnes would spend hours reciting the Our Father and the Hail Mary on her knees. Her parents realized that she was a very special child, totally dedicated to God, so when she was nine years old they placed her in a Franciscan convent known as Sackins, so called because their habits or scapulars were made of sackcloth. The child, Agnes, was such a model of virtue that she was an inspiration of holiness to those around her. At the age of fifteen she was sent to a new foundation, which was Dominican, at Proceno in the county of Orvieto. There, at the tender age of fifteen, Pope Nicholas IV made her abbess.

As an act of mortification Agnes would sleep on the ground with a stone under her head as her pillow. Until she was thirty years old she fasted on only bread and water. At the age of thirty, however, because of poor health, her spiritual director instructed her to eat other foods.

The people of Montepulciano in Tuscany wanted so much for her to return to them that they destroyed a house of ill repute and in its place built a convent for Agnes. This was an inspiration for her to return to her hometown where she established in this house nuns of the order of St. Dominic. Agnes continued to be a great example of piety, humility, and charity to all for the remainder of her life. Through a long illness she showed great patience and grace, offering her sufferings up to God for the redemption of souls. Agnes died at the age of forty-three at Montepulciano on April 20, 1317.

Agnes’ body was moved to the Dominicans’ church of Orvieto in 1435, where it remains to this day. In 1724 she was canonized by Benedict XIII.

Heavenly Father, St. Agnes never faltered in her deep devotion and love for You. Dear Father, may we also appreciate the spiritual things more than the things of this world and give to You our greatest devotion. In Christ’s name we pray. Amen.

Other Saints We Remember Today