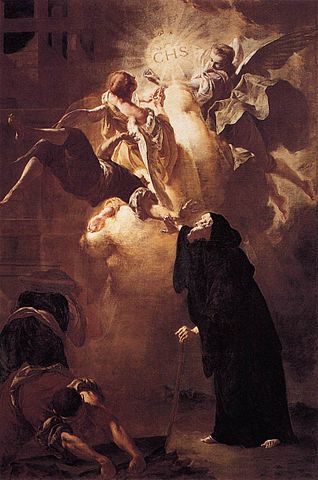 St. Francis of Paola (1416-1507) was an Italian hermit and the founder of a religious order. As a boy, he accompanied his parents on a pilgrimage to Rome and Assisi. Deeply moved, he decided to spend his life in prayer and meditation. For a short time Francis was with the Franciscans but then went off to live as a hermit in a cave overlooking the sea near the town of Paola.

Before Francis turned twenty, he was joined by other young men who wished to share in the contemplative life. A religious order was formed, and eventually approved by the Church in 1474; Francis named it the “Minims” (from the Latin minimi, meaning “the least”), and insisted his followers live a very austere lifestyle, with much emphasis on prayer, meditation, and fasting.

He himself was blessed with many spiritual gifts, such as the ability to perform miracles, to read minds, and to prophesy; though an unlearned man, he moved others by his wisdom and sincerity. Though he preferred a life of prayer and solitude, Francis realized God was calling him to be active in the world. He defended the poor and oppressed, even to the point of admonishing the King of Naples to give up his sins.

King Louis XI of France heard of Francis’ reputation and begged him to come and heal him of a possibly fatal disease, promising him great rewards. Francis refused until ordered to go by the pope; when Louis begged him to cure him, he told the king to pray to God alone. Francis didn’t abandon the king, however. His wisdom and holiness helped prepare Louis for a holy death. During this time Francis used his influence in the royal court to promote peace between France and her neighbours, and after the king’s death in 1483, he established his order in various French cities. St. Francis remained in France until his death in 1507.

1. One of the gifts for which we will be held accountable is our influence over others (even if we haven’t sought or desired this); we must use this influence in a positive way, as St. Francis did with the young men who came to him, and with King Louis XI and the French royal court.

2. Great spiritual gifts (even those we might consider miraculous) are sometimes given to God’s servants after much prayer and sacrifice, but these are only intended for God’s glory and for serving others.