Clad in armour and robes, a powerful emperor sits on a cold, stone throne. His throne is adorned with two ram’s heads representing the astrological sign of Aries. He holds a sceptre, reminiscent of an Egyptian ankh, symbolizing power. In his other hand is a golden orb representing his rulership over his domain. Behind him loom tall, icy mountains. A calm river flows below in the valley beneath the mountains. The Emperor is the fourth card of the Major Arcana. He is self-assured and regal. The Emperor commands respect and authority.

The Emperor is a powerful, commanding figure in the tarot. His appearance is a call to step into your power and authority. This can be in any area of your life: your relationships, career, or spirituality. The Emperor has complete authority over his domain. What in your life needs your attention? Where do you need to step up?

Don’t be shy in taking command of the situation. Fight against imposter-syndrome —the idea that despite your skills and accomplishments, you’re not good enough. When the Emperor appears, you do have the ability to succeed in this situation. You are worthy of success. Believing that you aren’t capable isn’t serving you. Embrace your authority and expertise. If the reading is regarding a conflict, the Emperor is a great card to appear favouring a fair resolution. It can also signify that you hold the power in this situation.

The Emperor can signify a need for more structure, disciple, and systems. This is especially true if you are experiencing issues from a lack of self-discipline in your life. Take responsibility for things that have been neglected. We tend to think of discipline as a form of punishment. Instead, reframe it as an act of self-love and self-care. Draw on images of benevolent father-figure archetypes to visualize positive discipline.

Its appearance in a reading can be a call to examine your relationship with fathers and authority figures. What influence, or lack thereof, has your father had on your life? Examining how you feel about this archetype can be the key to unlocking self-sabotaging patterns. Do you resist when people tell you what to do? Do you blindly follow the advice of people who you perceive as more powerful than you? Do you embrace leadership roles? Take note of your gut reaction to this card in your reading.

This card can refer to political figures as well. In predictive readings regarding global events, the Emperor represents the powers-that-be. This includes anyone, or anything, that wields authoritative power in your life.

The Emperor tends to represent leadership within families and relationships. Oftentimes the Emperor signifies a male who upholds traditional, cultural ideas of masculinity. Of course, this card can apply to women too. It’s anyone within a family or partnership that calls the shots. Whether it’s a patriarchal or matriarchal family, the person represented by the Emperor card is in charge.

Partners who embody the Emperor are stable, responsible, and in control of their emotions. They aren’t the outwardly affectionate type. There can be a sense of detachment in their relationships. Once you get to know them and have earned their trust, you’ll see more of their emotional self. They tend to express their love through practical gestures, material things, and by providing for their family. They’re very dependable and can be counted on to show up.

The Emperor has a tendency toward controlling behaviours. This is particularly true if the Emperor is showing up reversed in your reading (we’ll talk more about that in the reversal section below). Conflict can arise when your expectations of behaviour in a relationship clash with those of the individual represented by the Emperor.

Traditionally, the Emperor can be a literal representation of your father or grandfather in a reading. This card can show up in readings where the relationship with your father or other authority figures needs to be healed.

The Emperor card is often tied to politics and corporations. Workplaces represented by the Emperor card are very structured and have clear hierarchies. Depending on your personality, it can be frustrating waiting for projects to move up or down the chain of command. And whatever the boss says goes. If you accept that company politics are an unavoidable fact of work-life, you’ll be better equipped to handle these dynamics.

The Emperor in career readings can also be a call to step into a leadership position. Be open to accepting high-profile or managerial roles. Sometimes this card means that regardless of your position in the hierarchy, you must take ownership and responsibility for your work. Treat your area of responsibility as your domain to manage. Keep everything running smoothly with structured approaches, systems, and good habits.

In workplace conflicts, the Emperor represents a need for fairness and personal responsibility. If a problem is getting out of hand, take a detached look at where you may be falling short. If your performance depends on the success of others, then find out how you can better serve your team. Do they need concrete goals to hit? Are you being completely fair in your treatment of them? Are you modelling the behaviours you want to see in your staff? Stepping up as a leader can be hard, but you’ve got to do it.

The Emperor is a great card to appear for CEOs, managers, executives, start-ups, and anyone hoping to create their own “empire”. If you own a business, this card can indicate it’s time to expand and hire a team to assist you.

The Emperor is traditionally associated with fathers and husbands. This card can also apply to a powerful, confident female in your life. The Emperor can also represent an Aries (born approximately March 20th-April 21st).

Individuals signified by the Emperor card are stable, reliable partners and friends. They can be very detached and hard to get to know. Don’t expect a lot of emotional displays from them. They tend to be very traditional. Friction can arise if you’re ideas of how things should be are different from the Emperor’s expectations. At their best, they are objective and deeply responsible.

Of course, the Emperor is also strongly connected to political figures and leaders. They can represent anyone who wields power and influence over your daily life. 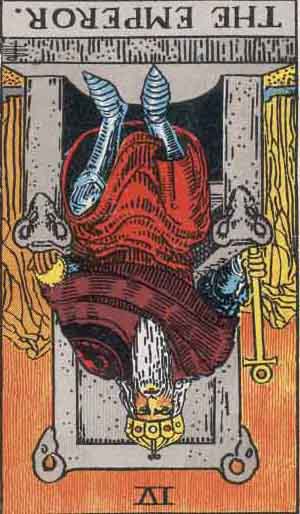 When reversed, a negative aspect of this card is a tendency toward authoritarian control. It can signal a stubbornness that becomes an absolute refusal to see the viewpoints of others. You, or the person in question, maybe trying to control with an iron fist. Rather than being objective, you may be coming from a place of emotion. If that’s the case: don’t go down this path. This situation calls for an objective and unbiased approach. Recognize and respect the sovereignty of others.

The Emperor reversed can indicate a need for discipline and structure. Things may have gone out of control due to unchecked emotions or a lack of follow-through. If a messy situation has arisen from a lack of leadership, be prepared that you’re likely going to be the one who has to step in and take charge.

The Emperor in reverse can also represent the corruption of an authority figure. This is the quintessential card of political corruption and unethical corporations. Be wary of how authority is being used to silence others. Don’t allow your rank and privilege oppress others.  Conversely, do not let your power be given away.

This card’s position can indicate that a coup is imminent. Getting ousted doesn’t usually happen out of the blue. Sometimes it’s a corrupt or irresponsible leader getting the boot. But sometimes, the person is being set up by an individual who has an agenda of their own. Take an objective, hard look at whether you or someone else is falling short. If critical tasks are being neglected, then be prepared for the fallout. Don’t let yourself or other jeopardize what you’ve worked hard for. Because of this card position’s connection to coups and uprisings, keep an eye out for those who are vying for your position.

People represented by the Emperor reversed can be controlling. When this card shows up reversed as a potential partner, be ready to navigate conflicts regarding expectations of roles in the relationship. This often manifests itself as problems regarding how things “should” be. Because of the Emperor’s connection to ideas of masculinity, these conflicts will often relate to your cultural ideas of gender roles within a partnership. Because of the Emperor’s connection with father-figures, be cognizant of how your own family dynamics may be playing out in your relationship. Be aware of negative or unfair cultural influences on conflicts.

Conversely, the Emperor card reversed can represent passivity in a relationship. There can be a lack of follow-through in plans and promises. Individuals represented by this card can have issues keeping promises and fulfilling responsibilities. There’s a lot of talk without action. If you promise something, try to see it through to the end. If you can’t deliver on a promise with good reason, you risk losing the trust of others. If passivity is the root of the problem, start resisting the urge to defer to others. Get straight on your goals and take your power back.

The Emperor reversed can indicate that a workplace or career lacks order and structure.

It’s also a red-flag signifying a potentially abusive or controlling boss. Imagine the tyrant who uses threats and anger to motivate their employees. If you suspect this card represents you, get control of your actions.  Seek outside guidance from a trusted source on how to better lead your team.

Sometimes this card is not about ruling with an iron fist. Instead, there’s a shunning of taking up a leadership position -often to the detriment of the situation. If you’ve been given extra responsibilities, it’s time to step up. This can manifest as ignoring dysfunctional dynamics and problems at your job. Turning a blind eye to conflicts and chaos will only make things worse. It’s tough to be the “bad guy” for establishing rules and expectations, but it has to be done. Be objective. Be fair. Take control of the situation.

As mentioned before, The Emperor reversed can indicate controlling behaviours. Rather than the objectivity and detachment seen in the upright Emperor, this card reversed represents emotional motivations and biases. Rather than honouring the autonomy of others, the Emperor reversed tends to manipulate or force their will onto others. If this card represents you in a reading, it’s a call to take a step back from a situation. Take your emotions out of it. Recognize that you don’t necessarily know what’s best for everyone.

On the opposite end of the spectrum, individuals represented by the Emperor reversed can be disempowered by either internal or external forces. There’s a tendency to be too passive and allow others to domineer them. Be on the lookout for undermining from others. Don’t allow yourself to be exploited.

I am powerful. I shape my world