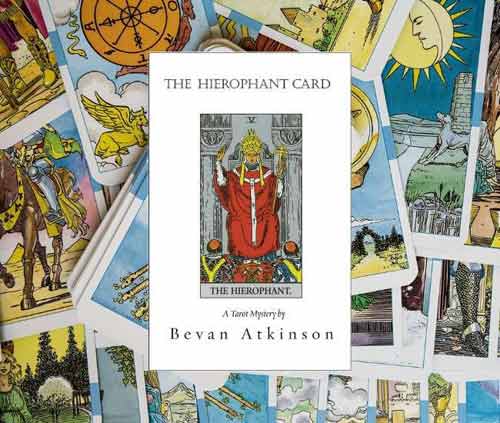 Truth to tell — I was about to embark on my first cosy mystery. You know, that subgenre of crime fiction in which sex and violence are downplayed or treated lightly, and the crime occurs in a small, intimate community. The detectives are almost always amateurs and are frequently women.

Bevan Atkinson’s The Hierophant Card (Electra Enterprises of San Francisco) checks off all the boxes for that definition — and a few more. It won me over with a fast-paced plot, an intriguing Tarot card-reading protagonist/narrator, and some lovely use of language reminding us that style counts as much as form when considering the pleasures of the written word.

This is the sixth book in Atkinson’s The Tarot Mysteries series. The card-reading angle is a fun device: it nicely brands her series and also gets us into the story.

Xana Bard, like our author, is a Tarot card reader, which she does as a hobby rather than a vocation because she is financially secure. In that people typically seek out readings to gain insight or comfort for a personal problem or life crisis, so it is that Thalia Thalassos, skeptical of the Tarot process, contacts our heroine hoping to seek clarity about her cheating husband Don, whom authorities suspect Thalia might have killed.

Thalia’s “everything is a mess” line explains her reasons for seeking out Xana — on the recommendation of a work colleague, Yolanda. The “none of it is my fault” part certainly provides clarity if you want to believe Thalia’s initial claim, but let’s reserve judgment for now.

Yolanda has told Thalia that Xana likes to get her fingers into “everybody else’s personal business, the messier the better.”  Xana doesn’t deny. In fact, she acknowledges that many potential readers “stop short because reading someone’s cards means, to some extent, I’m invading their life.” It’s why she never pushes anyone into a session.

SO WHAT IS A HIEROPHANT?

And what of the book’s title, the dominant card was drawn by Thalia — the Hierophant, or the Pope, which also happens to be drawn in reverse (as opposed to right-side-up)?

“When the Hierophant is reversed,” Xana explains, “what I get from the card is a need for social approval — looking to others for guidance, rather than having confidence in your own strength of character … This card is all about listening to our own inner voice, our own conscience or higher power … The Hierophant reversed can mean you’re not listening to the inner voice that tells you the truth even when you don’t want to hear it.”

But off we go as Xana immerses into Thalia’s dilemma far beyond reading Tarot cards. Almost out of her own curiosity, and perhaps a little coincidence, she finds herself travelling to the dangerous cliff where Thalia’s husband took a life-threatening fall (was it an accident?) during a 24-hour horse race; to a photographer who might have captured the moment; to the investigating police district offices; to the hospital where he was treated; and more in between.

At the hospital, prior to Xana’s arrival, we get into the head of night-shift nurse Bryce Gilbertson, who raises suspicions from the moment he is introduced making rounds. Those suspicions are heightened when he tells Jenny — with whom Don is having his affair — that his name is Bruce, which, as she can see from his hospital badge, it is not. File this as a future matter of concern.

While the plot keeps readers turning the pages, Atkinson’s nifty, witty writing has the opposite effect, causing readers to stop, admire and read again.

For example, says Xana, “Strangers who come to me for a reading are often frightened, and fear can convert all of us into self-centred, fight-or-flight-stricken impalas watching the cheetah coil itself for an eruption into a high-speed hunt.”

Or, “In spite of Thalia’s rage, I’ve learned that when someone asks you to listen to them unless they’re at that sloppy drunk stage where a ‘how-NASA-staged-the-moon-landing’ theory is about to be unleashed, it’s a sensible idea to give them a couple of seconds.”

From Xana’s razor-sharp insights: “I love how women talk to each other when they’re pissed off. One of my wounded-bird ex-boyfriends was dumbfounded by my description of a work disagreement with a female colleague, a disagreement peppered with ‘I feel this’ and ‘Well I feel that’s.’ He told me that a man in my situation would have said, ‘Fuck you’ and walked away.”

The Hierophant Card is a fun, fast read with outrageously believable characters showing their own unique assets and quirks. In Atkinson’s Xana, if readers are reminded of Jessica Fletcher, mystery writer and amateur sleuth extraordinaire from the cosy crime series Murder, She Wrote, no need to apologize.

Atkinson is a talented writer worthy of your attention. Whether you start your Tarot Mysteries journey with this title or The Fool Card, The Magician Card, The High Priestess Card, Empress Card or Emperor Card, enjoy the hand you are dealt.

The Hierophant Card is available for purchase. Learn more about Atkinson on her BookTrib author page.